And here we have the rumored murderer of Darren Kang with a few of his friends, just look at the really thuggish one on the far left. 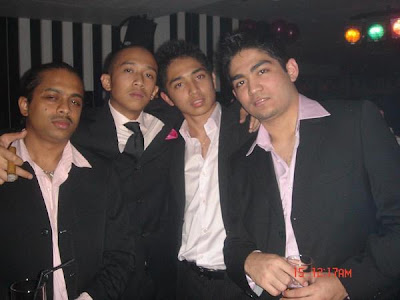 Wow, you learn something new everyday. Got an interesting tip few days ago claiming that the son of minister Nazri was involved in the murder of Sheffield University law student Darren Kang Tien Hua. It was not looked into, then a second tip came in with the same accusation a few days later with the added claim that witness came forward the night of the killing but later stop talking after they realize who the murder was related to. So I searched news articles from Malaysia in 2004 and what you know, the son of a Malaysian minster was on the murder scene of Darren Kang. The Star article did not mention the minster by name but the article does seem to backup the tipsters.

Apparently Nazri's son was the main culprit behind the savage killing of Darren, he was the ring leader of the gang of thugs that murdered the law student. Needless to say but there was a big cover up and they pinned the crime on a few Thai immigrant workers. The only interesting thing was reported in the article in The Star was that a son of a minister saw the murder of Darren Kang and was question by the police. A tipster said the group of men that teased Darren about how he was courting his girlfriend was lead by the son of the minister. According to the The Star article, the minister's "son was having supper with seven others when Darren, 23, was allegedly assaulted by restaurant workers armed with steel chairs, sticks and iron rods." A tipster said the restaurant workers were the ones that try to stop the attack. And it was the ministers son and several of his friends were the attackers. Darren Kang was murdered after he confronted one of the man asking him why the group had behaved as they did:

KUALA LUMPUR: The 22-year-old son of a minister is among several customers the police want to interview in connection with the death of Darren Kang Tien Hua, who died after being assaulted by at least 15 people in Desa Sri Hartamas on Monday.

City police chief Deputy Comm Mustafa Abdullah said the minister’s son was at the scene of the crime and would be called to assist in investigations.

“We have received different accounts of the incident from witnesses and we will call everyone in for questioning, including the minister’s son, to tell us what they saw,” DCP Mustafa said here yesterday.

The minister said: “ I don’t know anything about it, you have to ask the police about this. They are the ones handling it.”

His son was having supper with seven others when Darren, 23, was allegedly assaulted by restaurant workers armed with steel chairs, sticks and iron rods.

In the 3.30am incident, Darren, a Sheffield University student, back on holidays, died after he was beaten up by a group of men whom he confronted after they teased him over a show of affection by his fiancee.

DCP Mustafa said police were looking for at least four customers to help in the probe.

“The 11 are the main suspects in this case.

“We learnt that Darren was involved in a scuffle with several customers earlier, but the scuffle was broken up by other customers,” he said.

Who is the minister? It took great courage for The Star to print the article above, sure they omitted the minister's name and try their best not to link son with the murder. But readers of The Star know it has a tendency of omitting information that may be embarrassing to Minister Nazri. Here is the news report from The Star a day after the murder:

Law student assaulted and killed in front of fiancee

KUALA LUMPUR: A law student died after he was beaten up by a group of men who he had confronted for teasing him about how he was courting his girlfriend near a restaurant in Desa Seri Hartamas here.

Darren Kang Tien Hua, 23, a second year student at Sheffield University in England, was walking with his fiancee, Goh Win See, 24, towards Warung Uncle Don when the incident occurred at 3.30am yesterday.

Goh, when met at the University Malaya Medical Centre mortuary, said they had left a nearby nightspot and decided to have supper at the restaurant.

She said that as they passed by a group of people seated at some tables outside the restaurant, some of them seemed to be making fun of Kang.

“I was ahead of Darren as we walked to the restaurant. When I turned back to ask him to hurry up, he said that if I wanted him to catch up, I should say that I loved him. When I said that I did, several of the men seemed to laugh at Darren and passing comments among them,” Goh said.

“This agitated Darren who then confronted one of them, asking them why the group had behaved in such a way,” she said, adding she pleaded with Kang not to approach the men.

“One of them got up from his seat and began swearing at Darren with several others joining in. Within seconds, four of them cornered Darren and began kicking and punching him repeatedly.

“Others used sticks and the rest used plastic chairs to hit Darren,” Goh said, adding that one of them even hit Darren with an iron rod.

When the shopowner and staff members intervened, the group fled on motorcycles. Goh said she had called the police.

She said that with the help of some members of the public, Kang was taken to the Damansara Utama Specialist Centre where he was pronounced dead upon arrival at 4.15am.

His body was then taken to the UMMC where Goh lodged a police report at the police beat base there.

She said she was living together with Kang in Sheffield and was working as a customer service representative at an insurance company there.

“In fact, we had already bought the air tickets to return to England just earlier yesterday,” said Goh, adding they had returned to Malaysia on June 7 and were to leave on July 29.

Goh said that they were planning to get married once Kang finished his studies next year.

“We have known each other since we were in secondary school,” she said, adding that Kang was a caring and jovial person.

“We have picked up several people including the shopowner and staff members for questioning and have classified the case as murder,” ACP Zul Hasnan said, adding that umbrellas, iron rods and sticks, believed to have been used in the assault, were recovered from the scene.

ACP Zul Hasnan urged those who witnessed the incident to contact the district police headquarters at 03-22742222 or the nearest police station. 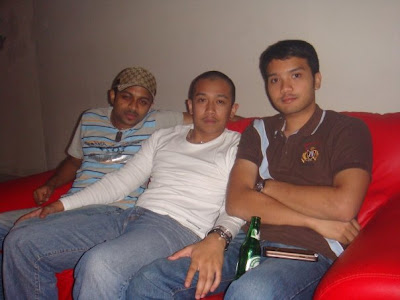 When the shopowner and staff members intervened, the group fled on motorcycles. And Guess who got into trouble?

The remands were issued by Magistrate Manira Mohd Nor.

The suspects, in their 20s, were picked up after Darren Kang Tien Hua, 23, from Bukit Kiara, was beaten to death by a group of men at a restaurant in Sri Hartamas at 3.30am.

Darren, a second-year student at the University of Sheffield, United Kingdom who was on three-week holiday, was believed to have earlier admonished the men for teasing him and his girlfriend.

In the ensuing fight, Darren was believed to have been hit in the head with a blunt object. He died on the way to hospital.